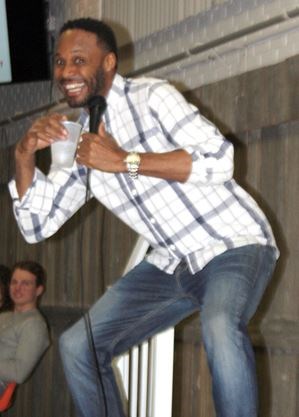 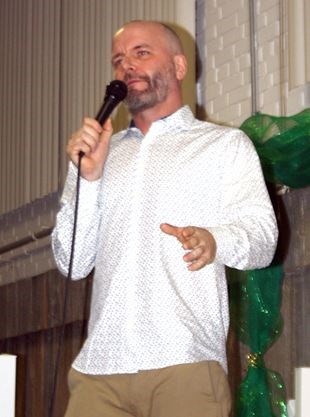 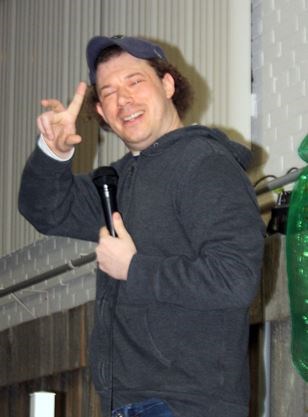 LISTOWEL – Leave it to a few guys from the city to deliver some insight on small town living.

The Yuk Yuks comedy night, hosted by the Listowel Agricultural Society, delivered another night of laughs this year, with three comedians taking the stage on Saturday, March 11. Cedric Newman served as the evening’s MC, and despite being from Toronto, had enough local jokes to keep the packed Listowel Agricultural Hall laughing, including his reason for not trusting the people of Stratford, Ontario.

“They’ve got a swan festival, but I think they’re racist,” Newman said. “They’ve got all these little swans walking through town, but the black one goes last.”

Newman also commented on the prevalence of Coffee Time restaurants in small towns, which he referred to as the last restaurant where indoor smoking was still allowed.

“You’ve got Starbucks for the rich, Timmies for the average joe, and you’ve got Coffee Time for the down and out failures of society,” he said. “I went in there the other day and ordered a Du Maurier chocolate dipped.”

As a native of Montreal, Newman couldn’t help but get in some digs against fans of the Toronto Maple Leafs, defending the looting that happened after the Canadiens Stanley Cup win.

“You think it’s bad we looted? If you guys win that CN Tower is coming down,” Newman said. “They’re going to march with it right across Canada.”

Jeff Elliott was the next to take the stage, addressing the topic of prison tattoos. While it’s commonly known that a tear drop tattoo under someone’s eye denotes a prison murder, Elliott said he recently came across a different kind of tattoo.

“I saw someone walking down the street in Toronto the other day with a heart tattooed in the same place,” he said. “I can only assume that means they resuscitated someone in prison.”

As a frequent flyer of Air Canada, Elliott questioned how passengers are expected to tag, check and load his own luggage on the conveyor belt.

“I finally make it onto the aircraft and into my seat after my shift, and they announce they have to de-ice the plane,” Elliott said. “I was half expecting someone to come over and hand me an ice scraper.”

Despite the practice of offering discount air fare, Elliott argued that some people aren’t suited for air travel after encountering a fellow passenger’s grooming habits.

“From behind me I hear a very distinct noise, one I think we’d all recognize,” he said. “It was the sound of nail clippers. That is bus behavior.”

The headliner for the evening was Jeff McEnery, who said he had finally reached the pinnacle of his career by performing in Listowel for a room of 200 farmers. McEnery drove his point home by saying his success as a comedian has taken him from a basement apartment, to a slightly larger basement apartment.

“There’s only two reasons why people drink rye; either A) suppress their demons, or B) release their demons,” McEnery said. “In Toronto, alcoholism is a disease. In the country, it’s a tradition.”

For anyone left doubting if they live in a small town, McEnery offered this piece of advice.

“You know you live in a small town if your dad has ever gone to the town dump, and came back with more than he left with,” McEnery said. “Christmas shopping is done honey!”